Yesterday was lovely and sunny and we had a great time outside all day.  Aleks and Rosey did a super job at the Agility show yesterday and everyone was tired last night!

Today is raining…yup rain in the desert so I guess it’s a good time to head home.  We’ll pull the slide in, stow the satellite dish and load the Vespa.  The coach will be ready for the next time we arrive in Phoenix.  We be back at the end of December to pick up the coach and head to California.  The kids are going to come with us to San Diego for New Years.  They’ll drive the little car.  It’ll be fun to have the little car in California this year…save on gas and way more fun than the truck for transport!!! 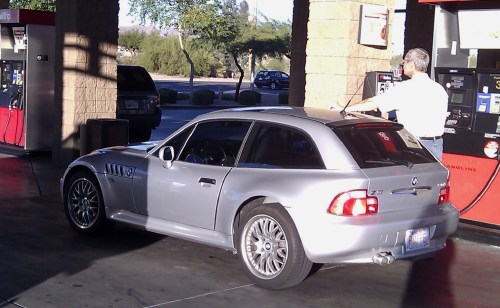 Off to tidy things up and head to the airport (a beer and streaming Grey Cup on the laptop!!).

A great Thanksgiving!  The wall is down, the beam is up and everything works super!!! 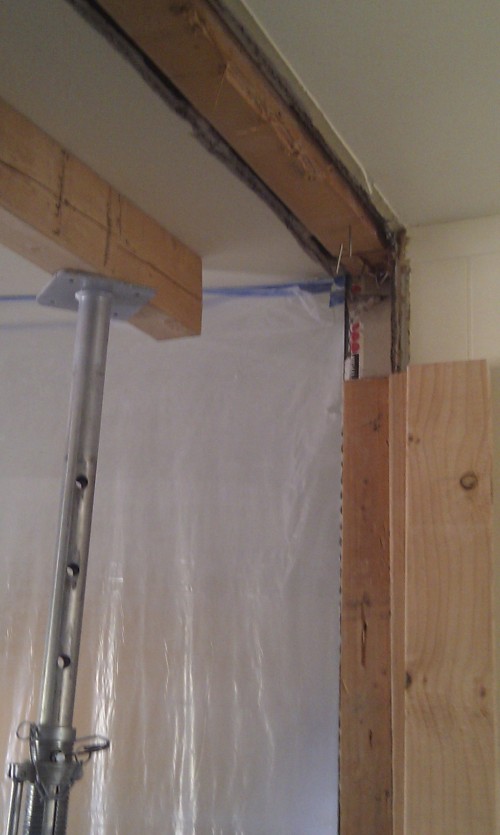 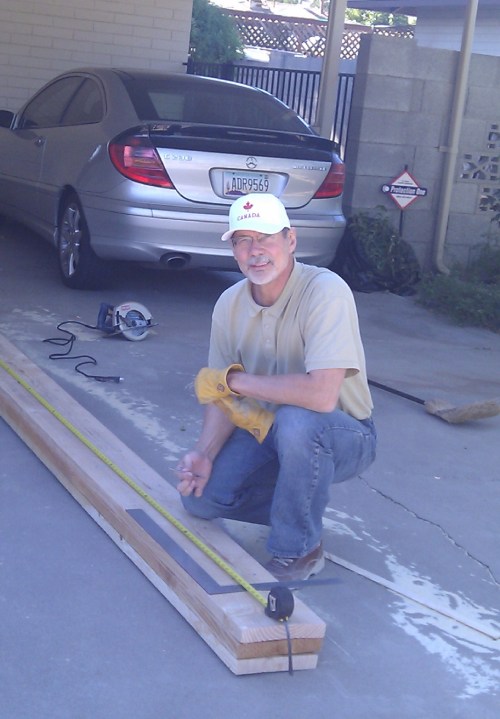 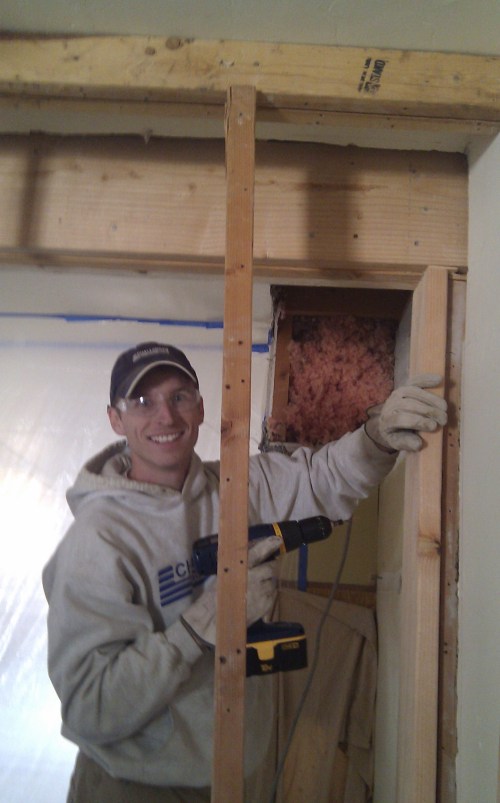 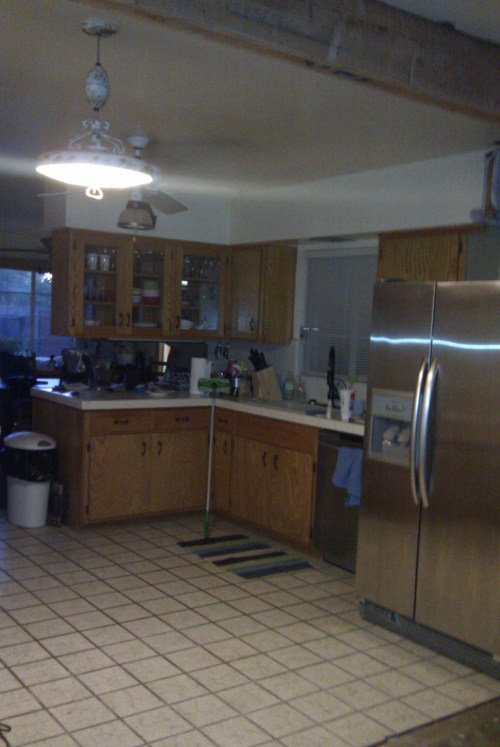 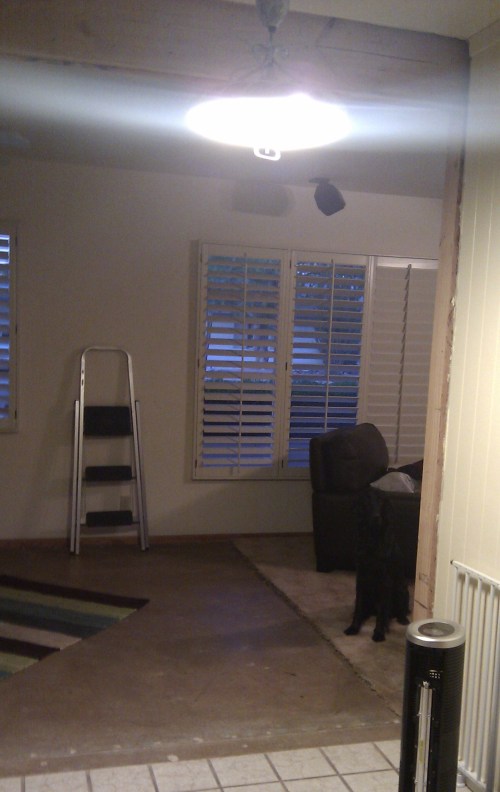 The view from the kitchen sans wall!

The new kitchen was delivered and is stored in the back sun room till after the next stage of renos.  Installing the support beam, taking down the wall was a big job done and now they are ready for the next renovation step.  The hot tub here at the resort was well used last night by all 4 of us!

Aleks and Rosie will be competing at an agility show today.  Ivars and I will dust off the clubs for a walk around the course and meet the kids later this afternoon for dinner.

The sun is shining, time for a walk!

A full turkey dinner with all the trimmings yesterday…yum!

Ivars and Neil spent the day working on installing the new beam for the new kitchen.  The wall is almost down.  New beam will go up today and then next remove the last of the 2X 4’s and the wall will be gonso.  This will open up the kitchen to the living room and change the whole feel of the house.

The new kitchen will arrive today to be stored till N and A can finish removal of the old kitchen.  They have a lot of work ahead of them but it’ll look amazing when finished.

It is so nice to be able to help out a bit with this big reno.  Good timing for this trip south and we can lend a hand this time!  The beam should be up and everything tidied up by this afternoon.  Maybe hit the golf course tomorrow?

Eggs Benedict this morning!  Off to Scottsdale and tto deal with that beam… and great food!

A hike in the desert.

The kids were at work all day so we planned a hike in the desert.

The coach is parked on the very east side of Mesa, very near Usery Mountain Park.  The winding road up to the park is mucho fun in the little car (a bike ride up is on the “to do” list as well).  Parked the car and laced up the MBTs and off we went. 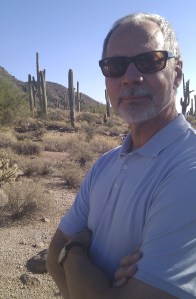 Ivars, along the trail. 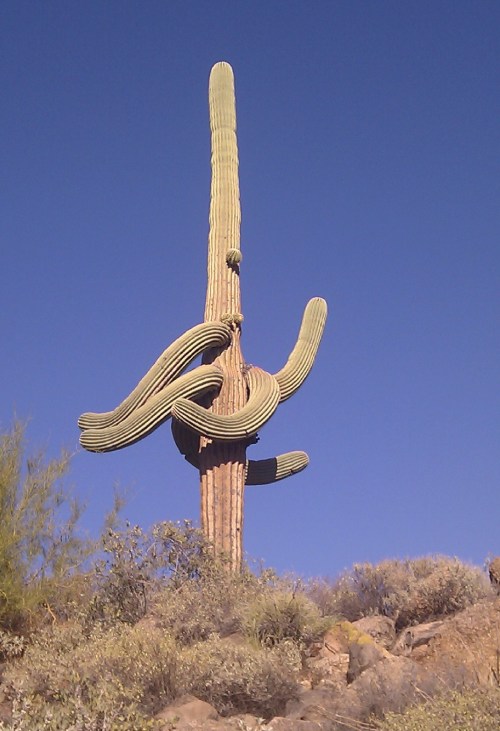 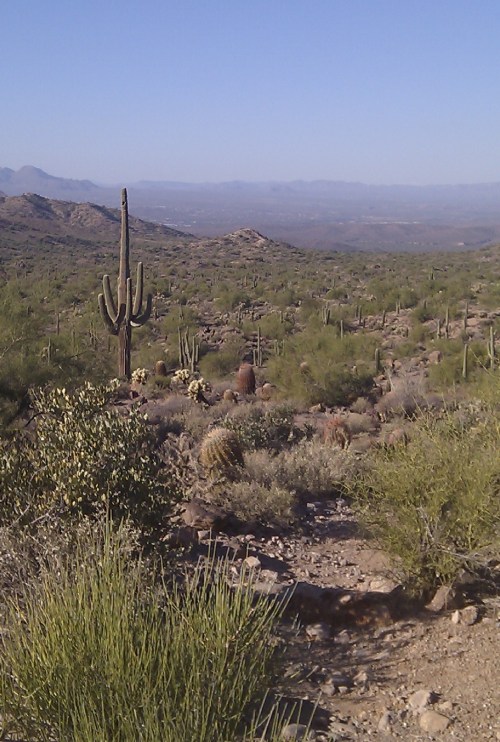 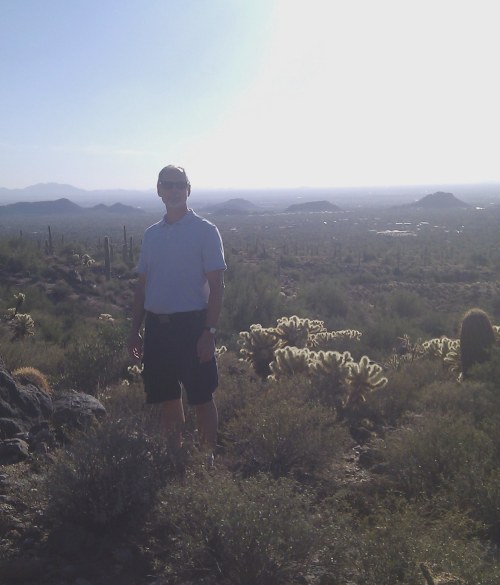 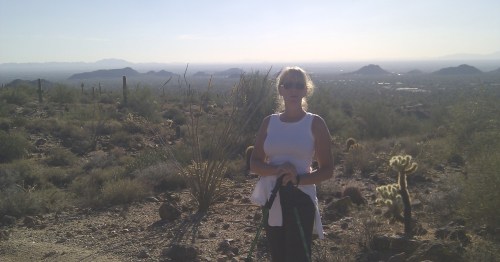 View west, Scottsdale in the background.

Golf is on the agenda today, day one of kitchen renovations at Aleks and Neil’s tonight!

We’re in Phoenix for the week…

We’re here to celebrate American Thanksgiving with the kids.  They’ll have Thursday to Sunday off work so we’ll get to see a lot of them this week…yeah! 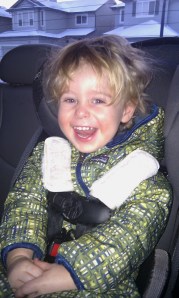 "Mack, do you want to get out of your seat and see Daddy?" 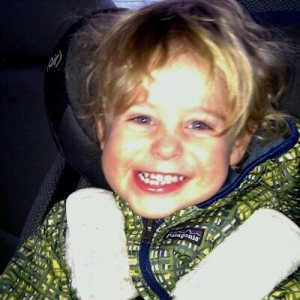 Our Friday…on the way to the airport… 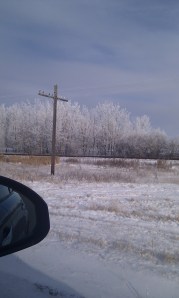 The start of the snow, cold and white.

We headed to Phoenix, flight late ’cause of the cold.  Arrival in Phoenix was warm and the coach was set up and ready for us.  The next day was with Aleks and Rosey at an Agility demo in Chandler. 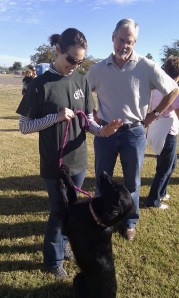 Yesterday was raining so we headed to Aleks and Neil’s house for the day.  They are planning a new kitchen and we had a good look at the plans online.  It’s going to be lovely…new and shiny!  We are helping with the project this week by getting dusty with Neil and Aleks and taking out a wall and installing an overhead supporting beam.

Gonna be a busy week…off to AJ’s for sweet potatoes for Thursday’s feast!

A big flat plate (big enough for 17’3″ hand horses), two vibrating electric motors (not too noisy), topped off with rubber mats and voilia…instant warmup without even leaving the cross ties!!!!  This is going to save alot of wear and tear on hocks and suspensories!

The articles on vibration therapy cite so many good, proven results from bone, hoof and cartilage growth to anti-inflammatory effects through out the whole body, we needed to give it a try and we love it!  The work this week has been amazing.  And they are all happy, happy ponies!!

Can’t wait till next week 🙂

Soooo, everyone has been on the Equivibe (including Mack) and we are on our way to getting used to the loud noise and crazy vibrations.

We started everyone on Sunday and yesterday tacked them up while standing on it.  It takes “on hands on deck” to get it done but it’ll get easier as they accustom to all the extra stimulation.  This is going to be a great addition to our overall training strategy.  Good health, good work.

William and Lance are clipped and today we’ll finish Fred new hairdo.  They look great and work so much better without their heavy winter coats.

Off to add to the mounting mounds of clipped hair…

The Equivibe has arrived and been installed in the cross ties.  Today starts the “acclimatizing” phase of work with the plate.

Here’s what it’s all about…  www.equivibe.com

Dr. Herbers recommended it to us early this fall and it totally makes sense to me!  Ivars has gone through all the medical data and put a big OK stamp on the addition to Flying Colours.

A big thank you to Andrew for muscling it into the cross ties last evening…and oh yeah…a big thanks to Mack who helped us as well!

Today is full body clip day for everyone so I’ll turn in on and they can get used to the sound.  We should have them used to it in the next couple days.  We’re all planning on using it regularly.  I think Linds could put together a great Pilates routine for us as well!

Off to turn on the Equivibe plate and check out the vibrations!!!

We’ve amped up the work and are into the pre season for California’s upcoming CDIs.

The horses leave for Del Mar January 4 so the first Thermal show will be too early for them.  They need some time to recover from the long drive south (44+ hours from home to Arroyo Del Mar).  So the plan is to start with the LA show.  The schedule gives us 2 National Level shows before the 4 CDIs.

Lance, our 10 year old Danish gelding,  is looking like he’d like to give GP a go this year.  His ones were great today, a full line with only one mistake.  The 3 Ps (pirouettes, piaffe and passage) are looking quite good.  He’s not quite sure he’s all that ecstatic about the added extra effort required to be an official GP horse just yet.  His fitness level is coming along and he should be ready by January.

Fred, Lindsay’s 8 year old Oldenburg mare, is headed for PSG/Inter One this year.  The work is coming along beautifully.  The line of 2 tempis is the skill we need to emphasize this month, everything else is falling into place quite well.  She is growing up to be such a lovely, elegant mare.

William, our 6 year old Hannoverian stallion, should also be ready for PSG/Inter One.  Being the baby of the group, he needs time to adapt to the intensity of FEI work.  The work is basically quite easy for him.  The learning for William is that we expect much more quality stride for stride, movement to movement and day to day.  He’s a smart boy and will figure life out quickly.

Before we put them on the truck to head south, we’ll plan a couple of dress rehearsal test days.  This year will be a big year for all three horses as they are all going to be coming down centreline one level ahead of last year.  We have had a great fall and the next couple of months are going to be sooo exciting…putting together all our fall homework in test form.  And, oh yeah, we need  3 freestyles…

Headed to the hot tub and a chilled glass of wine…