Schooling in the big ring…

This ring is the CDI ring Yesterday with Lindsey and Lance schooling. It’ll be packed to the rafters and loud Saturday night for the Freestyle class. Our last class, our last show in CA and it’s going to be a great time!

We are in the heavy lifting time slot right now of packing up the house and the horses for the long trip home. We all head back this weekend after the show. All our horses should be in their stalls at home at Flying Colours early next week.

Today is early schooling rides at the show grounds for Lance and William then back to Arroyo to Fred, DiMaggio and Sardonyx. The jog is at 3 this afternoon for Lance.

Tomorrow William’s class (Inter 1) is at 2:02 and Lance’s Grand Prix class starts at 3. (We won’t know Lance’s ride time for the Grand Prix till after the jog today.)

Off to pack something!!!

This never gets old…

So we are both really missing be part of the competition in San Juan this weekend but we have an amazing diversion here at Arroyo. 5 amazing diversions really, each one as amazing as the last!

Wednesday was “trail” day. Some of them had a short trail ride and some had a longer trail ride. And DiMaggio had his first Californian trail ride.  Good boy baby DiMaggio!!

Yesterday was a “full work” day for them all. 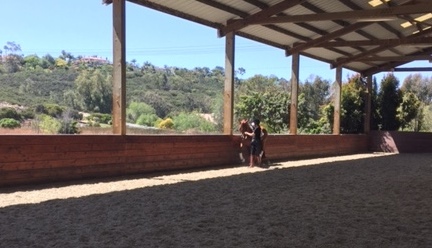 Thursdays are inhand days for William. Such a great tool for him. He’s learning how not to over use his stallion neck and lift his shoulders for more hind leg activity. His progress this spring has been wonderful. 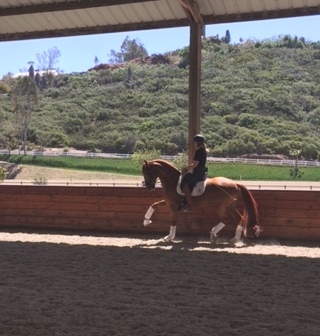 The saddle work after the inhand work is amazing! He’s going to be a super little Grand Prix competitor for the future!

Today is another full day of work with everyone. They’ll all get the weekend off and be rested and ready for lessons with Shannon on Monday.

You know what it’s like to bite your cheek? Well our favourite Grand Prix horse did it at the last show. We both knew he had done it and luckily, didn’t interfere with the test…thank goodness.

So we had the equine dental vet out last week. There wasn’t much to do, a light float to take care of minor edges. But he had a large (quarter sized) lesion on the inside of his cheek.

And because it’s slightly swollen, it’s likely to be re-bitten. So we’ve ridden in the snaffle since the last show giving his mouth a lot of room and as much time as possible to heal. His noseband is always super loose and we loosened it more.

When I checked him yesterday, the lesion was much improved (about the size of dime) but decided that it was still too likely he would re-bite it with his double bridle in and the test of the Grand Prix CDI ahead.

So we’re staying home instead of riding at the show in San Juan this weekend. This will give his mouth three more weeks to heal before our last California CDI at the end of April. Very hard decision but the right decision.

Lindsey is very disappointed (as you can imagine!!) but she is a competitor, a very good competitor…

comes when you simply refuse to give up,

with goals so strong that obstacles, failure and loss

only act as motivation.

So we’ll spend the week riding at Arroyo and cheer on Team Peters from home. Yeah live streaming!!!

Off to fit in an early morning lesson with Shannon… ❤

Grand Prix level is very difficult. And this weekend was no different except that the skills and timing that both Lindsey and Lance have developed this spring is quite exceptional. Thank you Shannon Peters!!!

The “Peters” method of dressage is light, expressive and horse empathic. And it’s the way we strive to train and ride every day. Thank you Shannon for sharing.

The Grand Prix on Friday was an 8 place finish (65%) and the Grand Prix Special on Sunday was 6 place (also 65%) with comments from Stephen Clarke of “excellent riding”. So proud of them!

And so thankful for this wonderful Grand Prix horse we have in our lives. Thank you Lance for a wonderful, wonderful weekend.

Big congrats to Steffen Peters on two very wonderful rides. A master class in dressage training every time I have the  opportunity to watch him school and compete. Amazing.

Big congrats to Ehren Volk and Magic. They rocked the Young Riders level! A top horse for Canada!

I’m headed back home; more horses at home, more time to spend with grandkids and there’s spring skiing at Lake Louise as well!

LAX this morning, home by dinner!

Off to stand in line for large hot tea before boarding!

Steffen rode a very relaxed Legolas to the win of the Grand Prix class with 77.5 and he also won the PSG on Bailarino 74.8. Yeah Steffen!

Today is the Freestyle classes at the CDI. It also will be live streamed (California Dreaming Productions). Hopefully for all competitors, there will be no rain today!

Lindsey and Lance warmed up beautifully yesterday! The connection from her leg and seat to her hand was wonderful. Half halts going through, lotsa energy!! The class was in the indoor and when he entered the arena in he backed off just a bit and some of the throughness was just not there. In plain words…”He was a tourist in there!!” No tension or spooking, he just wanted to slow down a bit and take it all in (he’s that kinda of a guy!!).

Such a great ride for Lindsey! She did the best she could to get him to focus and rode, rode, rode! 65%, 8th place. Thank you Shannon! ❤

The last half of this class rode the warmup (it was outdoors) in a deluge. It was coming down in sheets of rain. It didn’t last long but long enough to make the last rides very difficult. Our hearts go out to those competitors who dealt with so very difficult conditions.

We have the day off  from competition today. We’ll school Lance and then head to Arroyo to school the rest of the crew.

Off to a busy day,

Sun dogs on the horizon yesterday!

As the sun set yesterday, sun dogs (parhelia) or mock suns on either side of the setting sun appeared. We’ve seen them in the north, (they appear as the sun is close to the horizon) lots in the Arctic, but we’ve never seen them here. Let me know if you’d like a copy of Ivars photo! It’s now the new wallpaper on my phone!! 🙂 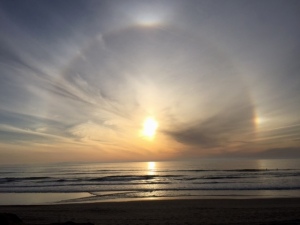 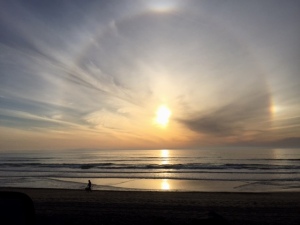 Taken from the truck, along the coast hwy…

We had a great day yesterday. Lance and Lindsey ran through the Grand Prix with Shannon, polishing up for the weekend. It was Fred’s last day on meds and her blood work came back all negative…yeah!  William is still coughing a bit but looks bright and happy. Yeah, yeah. And the best news, is the other 3 are all hale and hearty!!! Triple yeah!

Merle and Gezz with Lindsey, in the covered arena yesterday. Great job!

Ivars did the Torrey Pines hill…twice (I still don’t understand the appeal) and had a great day as well!

Today is walk day for Lance, a good groom on Fred, more meds for William and Samara, Sardonyx and Gezz have a regular ride day. Then we’ll pack up the trailer to ready for our very early get away to LA tomorrow morning.

Off to find my yoga mat…a busy day ahead!

We’re off to the Oscars…

Well, not exactly “off to the Oscars”. We’re off to Mid Winter Dressage CDI in Burbank this week. So as close to “off to the Oscars” that I’ll ever want to be!! I’m not up to speed on celebrities. Kung Fu Panda, the Avengers and Steve from Minecraft…well those guys I would definitely ask for autographs!!!

The jog is on Thursday so our plan is to be on the freeway at Thursday at 5am and head to Burbank. A 5am start from Arroyo is to try to avoid some of the ucky, ucky traffic in LA. It’ll be cooler in the trailer at that time as well.

Fred and William now have whatever the bug was that affected Lance last week. They are both on antibiotics and rest. The rest part is difficult because, especially Fred, neither of them have that “I’m very sick” appearance that Lance was wearing so well. But they have a bit of a cough and high temps so rest it is this week. Chino is going to have his hands full this weekend with both of them!!! Fingers crossed Gezz, Sardonyx, and Samara stay healthy!

So today is lesson day on Lance with Shannon and regular work for Samara, Sardonyx and Gezz. Ivars will be out on his bike, eating up the hills around Del Mar and loving the sunny weather.

The walk from the airport to the train along the harbour front…wonderful!

So off to Arroyo and my ponies…I’m in my southern happy place!!!