Yesterday was a busy but very laid back day.

Steffan is away at a show in Indio, the results aren’t up yet but 77% at PSG has been heard around the barn.  Yeah Steffan!  He is flying from the desert to Kentucky to pick up his award tonight…the top USEF Equestrian of the Year for the second year in a row…congratulations on your wonderful accomplishments, amazing!

As it was a quiet day around the stable, it was a good first day experience for all the horses.  They are all like kids at Disneyland; eyes wide open, trying to take everything in all at once!  Each one is very physically tired from 44 hours on the truck but they are emotionally very tired as well from all the new exteral stimulus.  Snow to palm trees is a full experience for humans, for horses it takes a lot to take it all in!  The rides were all very quiet and short except for Freddie.  She was on high alert for extra terrestrials.  She’ll be great today!

Here’s some photos of the day… 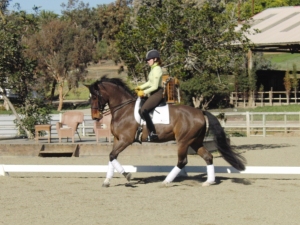 Lance in the early morning sun.

No photos of Fred as it was all hands on deck as she learned the ropes of life in the desert.  Next ride was Walker.  He was a good boy and was happy to move his body about. 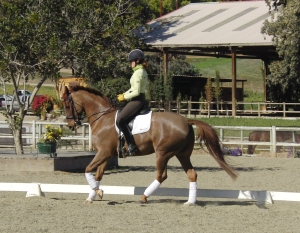 Walker, what a good boy!

Alex was next.  He was  physically very tired but totally laid back with all the sights and smells as they are quite familiar to him.  He really likes being back in California!

Alex back in the sunshine!

We then had to wake up William.  He definately is the most tired of all 5.  He is the youngest and this is the biggest adventure he has ever been on in his life.  He was in the first box stall in the truck and it was a bit isolated from the rest of them.  Even though he is a stallion, he still gets a lot of his confidence from Lance and Fred.  He is so glad he can now see and hear them and holler at Lance down the alleyway of the barn!

William trying to keep his head out of the dirt!

We get turnout from 2:30 to 3:30 each day.  Today was a little shorter because as rain is forecasted for next week (this is a big deal around San Diego) the staff was busy pulling on a tarp on the top ring to protect the footing.  There was a lot of galloping and snorting going on so they all came in for dinner a little early. 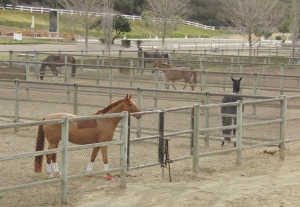 William, Alex, Walker, Lance and Fred booted up in their turnout pens.

The end of a great first day.  Everyone ridden, tack cleaned and food ready for tomorrow.  Off to find something to eat and a good beer and then back to the coach for bedtime!  I love my job!

Sun setting at the end of the barn alley way...end of a great day.

Peter leaves today so headed to the airport then off to the stable.